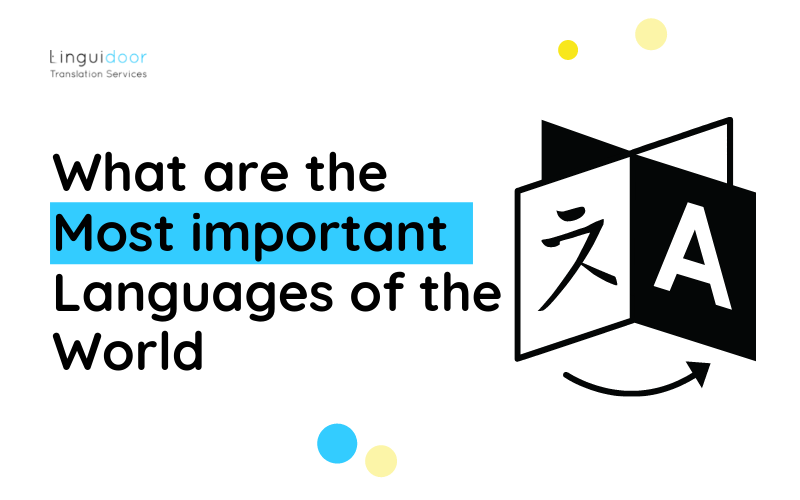 What Are The Most Important Languages of The world?

Home » What Are The Most Important Languages of The world?

Language is the tool which signifies and separates us from rest. For instance, there are about 6500 languages spoken in the world today. These languages offer us an identity and overall make this world more beautiful. As per the result of the latest census, the today world stands at a population of 7.7 Billion. We all might have come with a question of which is the Most Important Languages of the World, at some point in our life. In short, today we are with an article to our leaders of languages.

Spanish is an official language of 21 countries. In short, the most prominent speakers of Spanish have situated in Spain, Mexico, most of the parts of South and Central America. The origination of this language can be seen near the Castilla region of Spain. Spanish is spoken by about 7.6 % population of the world which truly makes it to the list of Most Important Languages of The world. Since there has been steep growth in Spanish speakers, as per El País there will be around 754 million speakers around the globe by 2060.

The spread of English Language all over the globe and the number of non-native speakers is the speciality of this language. Therefore, some credits are sure for British Empire rule in various countries. The recent cultural and Economic growth has led to an unprecedented expansion of “English” language. For many many people “English language” is more of a synonym to opportunities and quality of life.

Chinese is by far the most spoken language in the world. It’s an official language of People Republic of China, Taiwan, and Singapore. It is written in an ancient pictorial system which is known as “Han Characters”. Well if you wish to read to a Mandarin Newspaper you need to have knowledge of at least 2000-3000 characters. A chinse person is acknowledged with about 8000 characters.

Hindustani/Hindi is the language mostly spoken around Central or Northern parts of India. The prominent Hindi speakers reside in India, but some also spread in regions of South Africa, Mauritius, Yemen, Uganda, and Bangladesh. You write Hindi primarily in devnagri script. Hindi is the only language which has given us words like “shampoo”, “Jungle”, “Bungalow”.

French is another Romance Language in our list and it is also the official language of 28 countries. The countries with which a higher number of Non-native speakers reside in Canada, France, Belgium, and Switzerland. However, One can also find some natives of East Caribbean Islands and central Africa speaking French. The passage of time has led to the influence of Celtic and Germanic tongues.

In spite of the Japanese being the most widely spoken language, the origin to it is quite unknown. For example, It mainly adopts “hiragana” and “katakana”. Japanese has about 40% of its characters adopted from Chinese languages. In spite of being with an unclear history, it is among the Most Important Languages of The world. Other than in japan, you will find the Japanese speaking personals in the US, Philippines, and Brazil.

Korean is adopted as the official language of the Republic of Korea and the Democratic Republic of Korea. Whereas each nation has adopted different forms. Other than the Korean peninsula region, you will find the Korean speakers in China as well. But the standard to this language has been maintained by both countries over the “Seoul Direct”.

Language and professional document translation in different Language are playing an important role in brand and company expansion. If you want to expand your company and brand in foreign Market, please contact us at services@linguidoor.com or visit us at www.linguidoor.com.